Charter has announced plans to deliver gigabit high-speed broadband to approximately 133,000 unserved Texas homes and small businesses, as estimated by the Federal Communications Commission (FCC). As part of this effort, more than $586 million will be invested in Texas, which includes an expected private investment of at least $400 million by Charter and more than $186 million in support won by Charter in the FCC’s Rural Digital Opportunity (RDOF) auction. You can view a map of the Texas expansion here. The effort is part of the company’s recently announced expected investment of approximately $5 billion — offset by $1.2 billion in RDOF support — to expand Charter's network to what the FCC estimates to be more than 1 million homes and small businesses in lower-density, mostly rural communities across 24 states that do not have access to broadband service of at least 25/3 Mbps.

Investing in Deep East Texas
Deep East Texas is one of the most underserved regions in the nation. In fact, the Deep East Texas Council of Governments’ (DETCOG) 2020-2025 Comprehensive Economic Development Strategy identified the “Lack of Widespread Broadband Internet Availability and Affordability” as a top challenge facing the region, with nearly half of Deep East Texas residents experiencing download speeds of 10 Mbps or less. Charter’s newly-announced commitment to East Texas will help close the gap, making gigabit connections from Spectrum Internet® available in areas within all 12 Deep East Texas counties.

Charter’s high-speed broadband investment will also help the area achieve its workforce and economic development objectives. A May 2020 DETCOG Study found broadband access could add 10,300 new jobs and $1.4 billion in GDP growth to the area over 10 years. The same study found that today, residents of Deep East Texas pay 390%–430% more on average for fixed-line internet service compared to those in the Dallas-Fort Worth Metropolitan Area. The homes and small businesses reached by Charter’s Deep East Texas expansion will be able to benefit from Spectrum’s high-value national pricing and packaging structure and customer-friendly policies.

Investing in El Paso County
Charter’s expansion will also include projects in the westernmost part of the state — connecting an FCC-estimated more than 1,400 homes and small businesses in El Paso County with access to reliable, high-speed broadband and the full suite of Spectrum products and services. Charter’s expansion includes locations near the Fabens and Tornillo Independent School Districts, whose students have struggled with a lack of connectivity during the COVID-19 pandemic.

Charter’s announced investment in broadband deployment is a continuation of ongoing investment in the El Paso area. In 2020, Charter announced an expansion of its Spectrum call center operations and the creation of more than 350 new jobs in El Paso, offering competitive starting wages, achievable incentive opportunities that can bring total annual compensation above $50,000 — with top performers exceeding $100,000; comprehensive health benefits; company-matched 401(k) savings plan; as well as free and discounted internet and TV services. The El Paso sales operation center and its jobs were made possible by a $2.3 million investment by Charter, along with incentives and additional support provided by The Borderplex Alliance, The City of El Paso, and El Paso County.

Investing in Wichita Falls
Charter’s RDOF-supported investment will also bring access to reliable, high-speed broadband and the full suite of Spectrum products and services to an FCC-estimated more than 1,200 homes and small businesses in Clay and Wichita Counties. Last year, Charter’s Spectrum Networks launched its award-winning format for high-quality, hyperlocal news, politics, weather, and original local content to Spectrum customers across Texas. With the expansion, Spectrum News 1 began serving Wichita Falls/Dallas-Fort Worth as well as the Southern and Western regions in Texas, in addition to its existing coverage of Austin and San Antonio. 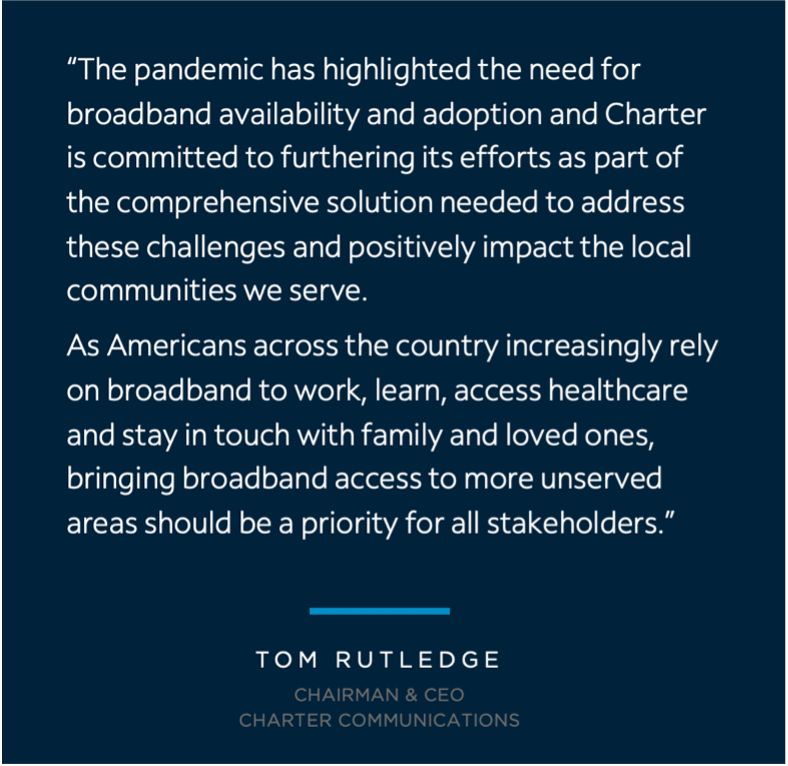 Preparation for the RDOF Phase I broadband buildout has already begun and will include Charter expanding its existing construction organization in order to focus on deployment of this new fiber-optic network. Charter expects to hire more than 2,000 employees and contractors nationwide to support the RDOF and future rural buildout initiatives, including local crews in state for network construction. Charter currently employs more than 12,000 people in Texas, with employees already earning at least two times the federal minimum wage with a commitment to raising it to $20 an hour next year.