Charter has announced plans to deliver gigabit high-speed broadband to approximately 98,600 unserved South Carolina homes and small businesses, as estimated by the Federal Communications Commission (FCC). As part of this effort, more than $362 million will be invested in South Carolina, which includes an expected private investment of at least $250 million by Charter and more than $112 million in support won by Charter in the FCC’s Rural Digital Opportunity (RDOF) auction. You can view a map of the South Carolina expansion here. The effort is part of the company’s recently announced expected investment of approximately $5 billion — offset by $1.2 billion in RDOF support — to expand Charter's network to what the FCC estimates to be more than 1 million homes and small businesses in lower-density, mostly rural communities across 24 states that do not have access to broadband service of at least 25/3 Mbps.

“From virtual school to telehealth and everything in between, this past year has proven broadband access is a necessary part of our day-to-day lives,” said Gov. Henry McMaster. “Charter’s investment in our state will create opportunity for the South Carolinians they serve and will give our rural communities tools to help foster unprecedented growth and prosperity.”

State Senate Finance Committee Chairman Hugh Leatherman stated, “The pandemic laid bare the urgent importance of ensuring all South Carolinians have access to the tools and opportunities supported by broadband internet. This investment from Charter will help our state meet this challenge and bring high-speed connectivity to thousands of previously unserved residents — supporting their educational and economic success.”

Through this RDOF-supported project alone, Charter is projected to connect 91% of South Carolina’s RDOF-awarded locations with quality, high-speed broadband. Charter’s RDOF award will result in buildouts in 40 of South Carolina’s 46 counties, including expansion into nine counties not currently served by Charter, helping to close the gap for many more South Carolinians. Charter’s expansion will be a tremendous complement to the state’s CARES Act-funded Broadband Infrastructure Program expansion, which extended high-speed broadband access to nearly 20,000 structures.

The homes and businesses to which Charter has committed to build include some of the most impoverished counties in the state, with 40% of RDOF support won by Charter to be invested in counties designated some of the most economically challenged by the South Carolina Department of Revenue. Over the next several years, Charter will extend its network to reach an FCC-estimated additional more than 33,000 homes and small businesses across 13 counties that have seen the highest unemployment rates in the state.

The long-term impact of Charter’s expansion will be transformational, for example: 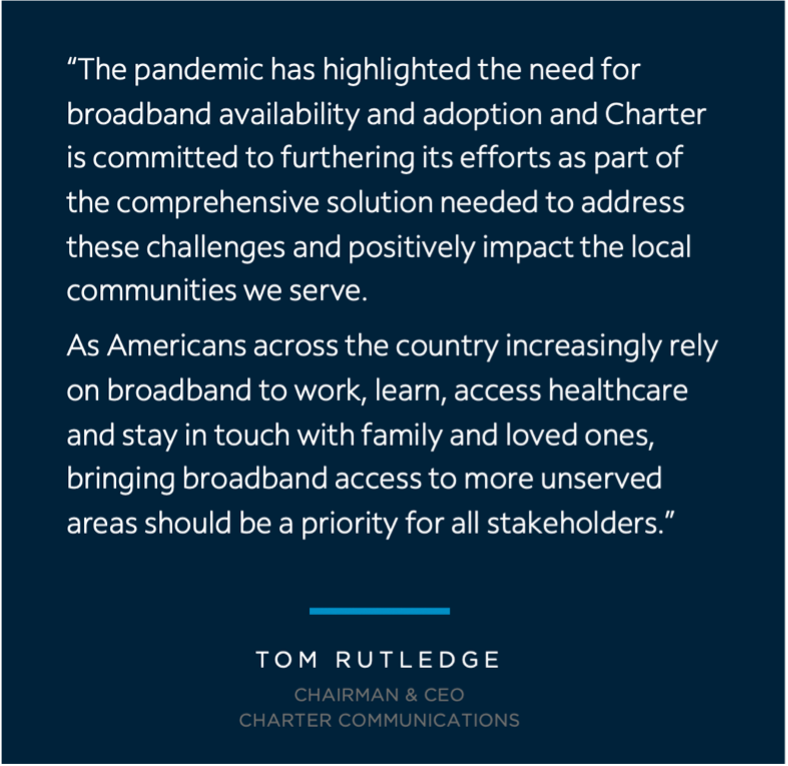 Preparation for the RDOF Phase I broadband buildout has already begun and will include Charter expanding its existing construction organization in order to focus on deployment of this new fiber-optic network. Charter expects to hire more than 2,000 employees and contractors nationwide to support the RDOF and future rural buildout initiatives, including local crews in state for network construction. Charter currently employs more than 3,000 people in South Carolina, with employees already earning at least two times the federal minimum wage with a commitment to raising it to $20 an hour next year.