Charter has announced plans to deliver gigabit high-speed broadband to approximately 112,000 unserved Ohio homes and small businesses, as estimated by the Federal Communications Commission (FCC). As part of this effort, more than $556 million will be invested in Ohio, which includes an expected private investment of at least $450 million by Charter and more than $106 million in support won by Charter in the FCC’s Rural Digital Opportunity (RDOF) auction. You can view a map of the Ohio expansion here. The effort is part of the company’s recently announced expected investment of approximately $5 billion — offset by $1.2 billion in RDOF support — to expand Charter's network to what the FCC estimates to be more than 1 million homes and small businesses in lower-density, mostly rural communities across 24 states that do not have access to broadband service of at least 25/3 Mbps.

State leaders recognize the importance of rural broadband expansion to Ohio’s future. Of the announcement, Gov. Mike DeWine remarked, “Ohio welcomes Charter’s rural expansion project, which will bring substantial resources to bear to help close the broadband gap in unserved communities across the state. Charter’s broadband deployments will support greater prosperity and opportunity for all Ohioans.”

“Gov. DeWine and I have made a mission of expanding high-speed internet access to help people around the state be better connected — whether it’s students accessing homework online, moms and dads working remotely or grandparents connecting to their families,” said Lt. Gov. Jon Husted. “We appreciate the commitment Charter has made to better serving their customers and helping us close the digital divide.”

Charter’s commitment to improving broadband access complements a key priority of the DeWine-Husted administration and the Ohio General Assembly, which have made working with private industry a priority component of its comprehensive efforts to bridge the digital divide and deliver high-speed internet access to unserved and underserved Ohioans.

An April 2017 economic study by The Ohio State University found that if unserved Ohioans were connected to adequate broadband access, it would mean as much as a $2 billion impact for Ohio families and businesses, which does not include other potential benefits, like reducing the period of unemployment among job seekers. Charter’s investment in expanding broadband access will be an important step toward reaching that goal and unlocking opportunity for Ohio.

Connecting Appalachia
Roughly 70% of the homes and small businesses estimated to be connected by Charter are located in Appalachian counties, which have historically struggled with the challenges of chronic poverty and which have a higher percentage of unserved areas than other regions in Ohio. The FCC has estimated that over the next several years, Charter will reach an additional 80,000 homes and small businesses across 28 underserved Appalachian counties.

The long-term impact of Charter’s investment will be transformational, for example: 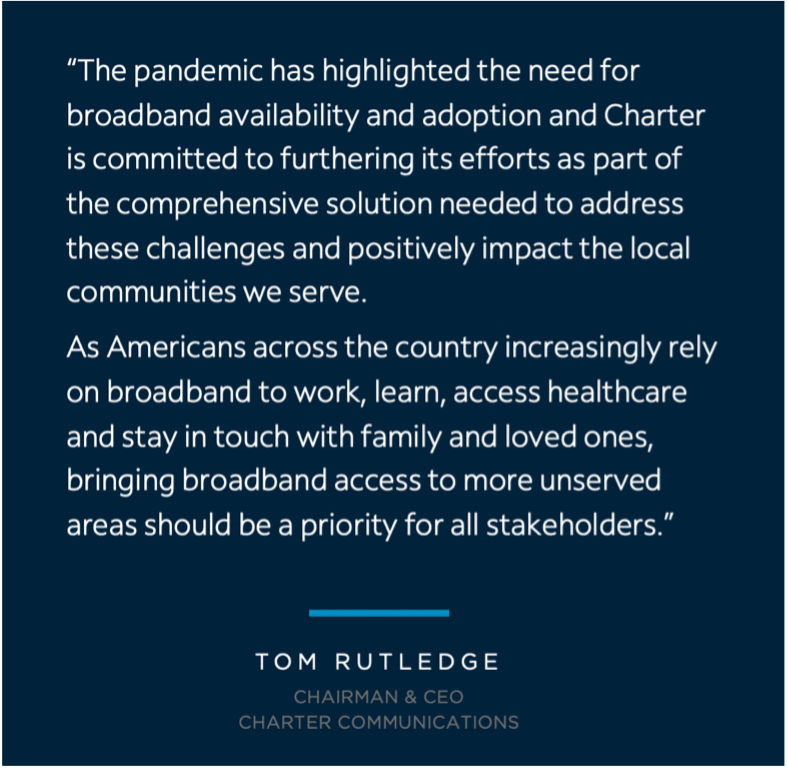 Preparation for the RDOF Phase I broadband buildout has already begun and will include Charter expanding its existing construction organization in order to focus on deployment of this new fiber-optic network. Charter expects to hire more than 2,000 employees and contractors nationwide to support the RDOF and future rural buildout initiatives, including local crews in state for network construction. Charter currently employs more than 7,600 people in Ohio, with employees already earning at least two times the federal minimum wage with a commitment to raising it to $20 an hour next year.

Timely Execution Depends on Prompt Permitting and Access to Utility Poles
The timely execution and potential reach of the buildout are dependent on several external factors, including the utility pole permitting and “make-ready” processes. With fewer homes and businesses in these areas, broadband providers need to access multiple poles for every new home served, as opposed to multiple homes per pole in higher-density settings. 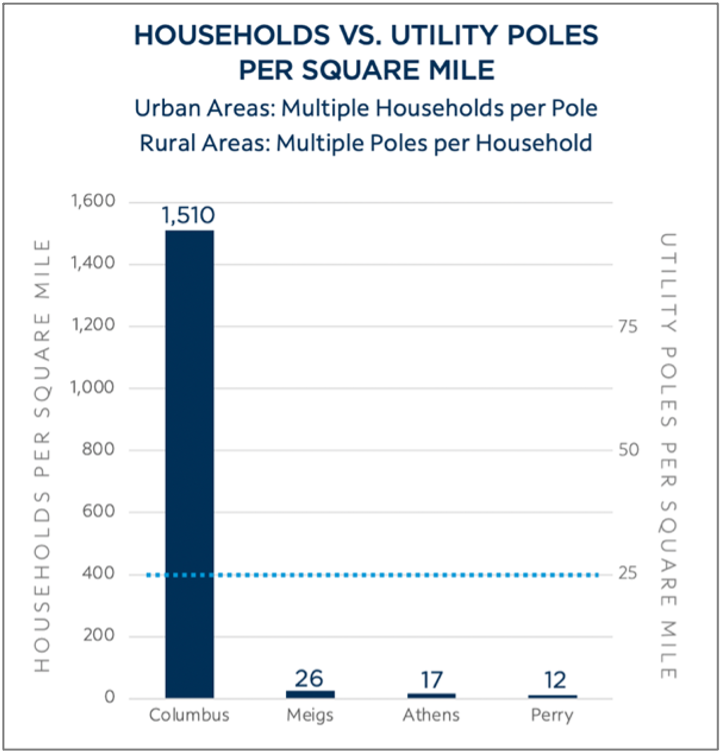 For example, a January 2020 study from the Buckeye Hills Regional Council – a council of governments dedicated to improving the lives of residents in southeast Ohio – found around 1,510 households per square mile in Columbus versus 26 households per square mile in Meigs County; 17 in Carthage Township, Athens County; and only 12 in Monroe Township, Perry County. The study approximates 25 utility poles per mile. As a result, pole applications, pole replacement rules and their affiliated issue resolution processes are all factors that can have a significant impact on the length of time it takes to complete projects in these rural areas.