Charter has announced plans to deliver gigabit high-speed broadband to approximately 54,000 unserved Indiana homes and small businesses, as estimated by the Federal Communications Commission (FCC). As part of this effort, more than $259 million will be invested in Indiana, which includes an expected private investment of at least $200 million by Charter and more than $59 million in support won by Charter in the FCC’s Rural Digital Opportunity (RDOF) auction. You can view a map of the Indiana expansion here. The effort is part of the company’s recently announced expected investment of approximately $5 billion — offset by $1.2 billion in RDOF support — to expand Charter's network to what the FCC estimates to be more than 1 million homes and small businesses in lower-density, mostly rural communities across 24 states that do not have access to broadband service of at least 25/3 Mbps.

State leaders recognize the importance of rural broadband expansion to Indiana’s future. Of the announcement, Gov. Eric Holcomb said, “Charter’s move to expand broadband availability in Indiana will play an enormous role in ensuring all Hoosiers, particularly those living in rural areas, can access 21st-century online tools and services. Their significant investment will complement our state’s own nation-leading broadband program to help create jobs, build businesses and connect more people at a time when so many are still struggling from the effects of the pandemic.”

Sen. Todd Young remarked, “Rural broadband deployment has the power to transform Indiana communities, especially those that are underserved. Investing in this critical infrastructure will have meaningful and long-lasting benefits for education, telehealth, agriculture and jobs in our state.” 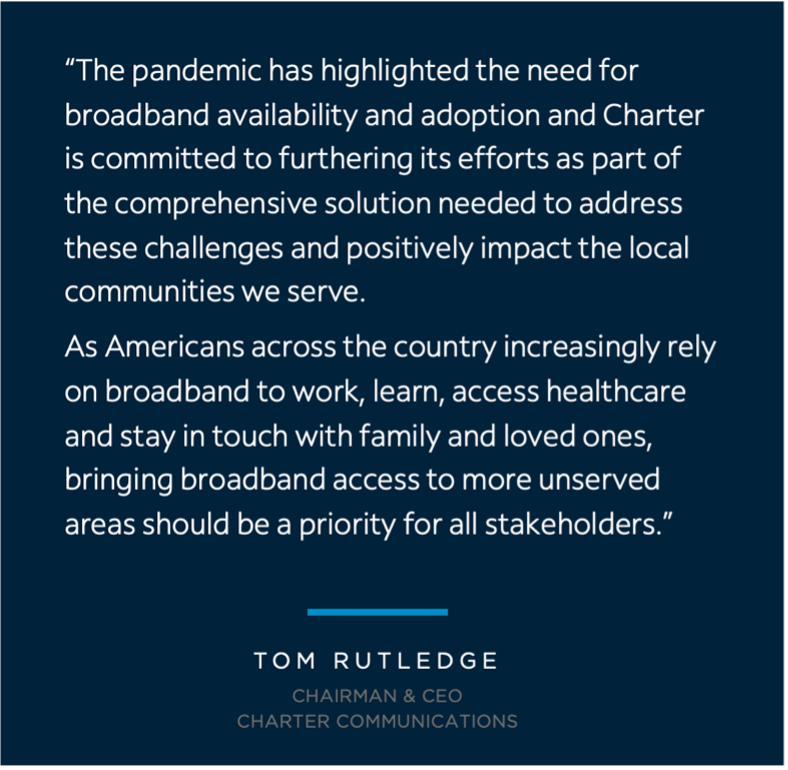 Preparation for the RDOF Phase I broadband buildout has already begun and will include Charter expanding its existing construction organization in order to focus on deployment of this new fiber-optic network. Charter expects to hire more than 2,000 employees and contractors nationwide to support the RDOF and future rural buildout initiatives, including local crews in state for network construction. Charter currently employs more than 400 people in Indiana, with employees already earning at least two times the federal minimum wage with a commitment to raising it to $20 an hour next year.